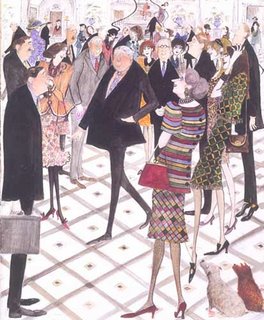 Growing up in a typical middle class neighborhood in the 1960's allows for a host of lifetime psychological imprints. Imagine the 1988 television show 'The Wonder Years' and you have now instantly entered my life as a kid. It was a little disturbing the first time I watched the program because it was so right on the mark--the ranch style house, the awkward best friend, the school and even the girl. I felt like someone snuck into my past, stole my idea, and ran with it.

It was the adult characters though that really caught my attention, specifically the father. I was an adult myself in 1988 with a child in elementary school--and what did she think of me as a provider? Did she feel I was Honorable? Hard Working? Successful? The father character in the show was most certainly the first two but was he Successful? Financially speaking, no he wasn't. He lived in a ranch style house for crissakes--purchased for $30,000 at the most. (I saw one the other day just like it for $425,000 but that's another story.)

When I was eleven years old a new kid moved in up the street. They bought the second to last house in the next neighborhood over which everybody understood was better in just about every way--bigger houses, nicer trees, nicer cars parked in the driveway, etc. It was clearly a notch above where my family lived and the only reason one wouldn't buy in that neighborhood was household economics. Same street mind you, but a different world entirely when the reality of social status first hits you.

"How much does your dad make a year?" the new kid asked me one day. I'll never forget the moment. Its been almost forty years and it still crosses my mind.

"I don't know." And I didn't. I had no earthly idea. We never talked about things like that in our house.

That put it in perspective for me pretty quickly. The new kid's house had expensive looking furniture and big televisions. They had a refrigerator that put ice in your glass and it was filled with lots of Cokes and good food--their pantry, too. His dad had a new Mercury and his mom had a convertible, and she was real pretty for a mom. I wasn't sure of much at that moment but I was definitely sure of one thing--my dad didn't make $30,000.

"Wow," I probably said. I don't remember. I do remember what he said next.

"Your dad probably makes less than $20,000," he said. I wasn't sure. That still seemed a little high to me, all things equal.

The events that followed that otherwise mundane exchange of words between children are also unforgettable to me. Back at home the question had no sooner left my mouth when I instantly realized the enormous weight and complexity of the issue. I crossed an invisible line in our household that no one had ever bothered to tell me about. I should have known better.

I should really have known better than to even mention my earlier 'income' exchange with the new kid lest I repeat the conversation word for word several times into the night, nearly in tears--the latter coming only after repeated and intense interrogation from both parents. It was their version of 'good cop/ bad cop' only without the good cop portion. Since that day in 1967 I've been acutely aware of the 'annual income' subject. I respect its intimate nature and understand that it is but only one way of defining a person's success. As a Realtor I need to be especially sensitive to this as I deal with many clients spanning many income levels. Still, I'm always mentally categorizing and comparing and to be sure, I'm quickly drawn to articles on the subject.

If you click on my sidebar under Other Links you'll find a new Rank Your Income Calculator I just linked from Kiplinger.com. For those of you (us) that still have a little bit of the 'new kid's' urge to compare, it's another fun tool to play with.


Posted by GenoPetro.House at 8:36 AM