Have a Happy (Photo)Shopping Season!
﻿(Oh, and if your phone has some smarts, then you can follow me on it as well.)

Posted by GenoPetro.House at 9:29 AM 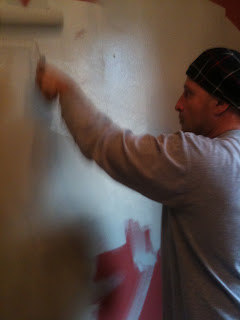 No, I'm not tagging a building.  I'm re-painting my dining room from OMG, You Make Me Feel Like Dancing Red  to WTF, Victorian Green. What up with paint samples? They always look different once they're on the wall; darker and much harsher in true daylight (I guess it's just how they roll). The phenom is similar to what I hear occurs on Matchmaker.com. Sure am glad I re-married before Web 2.0 and Photoshop.

Anyway, a new color for a new Chicago Real Estate year. Just keeping the Forest Glen house fresh and showable in case we get the urge to shuffle off to Buffalo Grove for good. *COL!
Not sure painting does much for home equity these days but there is only so much dancing one guy can do. And ....it, no duh, makes the missus happy. Speaking of  showing houses and dancing etc, check out my latest post (along with all my BHB archived contributions) on Bloodhound Blog:

(Oh, and if your phone has some smarts, then you can follow me on it as well.)


sneak photo by Mona Petro
Posted by GenoPetro.House at 8:26 AM

Memoirs of a Big, Fat Liar

Lightning In A Bottle
Actually, a bunch of big fat liars. I'll include myself in the group for this exercise (as an embedded observer, of course) although I can state here comfortably--eyeball to eyeball, without flinching and safely nested behind the double locked doors of my home office library--that my truthfulness in business dealings consistently falls within the soupy gray boundries of acceptable sales chatter. In other words, I try not to exaggerate or overblow my Real Estate accomplishments when things fall nicely into my lap nor do I whine and moan (or shriek like a little girl...anymore) at the first sign of a market correction or the foreshadow of a lenghty Listing stint.

The truth is, the Listing Agent who has the signed Exclusive Agreement when the actual Buyer walks through the door is the hero. Period. Don't let them (us) tell you otherwise. We all know this. I once lost a deal (and one of my best friends) early on in my career two days after such an Agreement expired. I had a lot of activity on the property--many showings, loads of interest--but on day 90, my just-married buddy decided that the unsold property was hurting our friendship and yanked the house from me. He fired me over the phone from Vegas--on his honeymoon. (I'd love to report here how that marriage ended up but that would be gloating now, wouldn't it?)

The new Agent was literally taking down my sign and putting his own up when the eventual Buyer came tooling along with his wife. They wrote a deal without representation (a 'double bubble' for the Agent) and Closed in 30 days. That my friends is what we Realtors call, 'lightning in a bottle.' And I've been the recipient of such happenstance, as well. I've just learned not to gloat over it when it occurs nor do I stand outside in the the middle of a thunderstorm (or worse yet, a drought), arms raised to the heavens with coke bottles in each hand, waiting for it to strike again. I have other stupid things I do...

"Yes, I know it was featured in the local newspaper but no one is reading that particular issue anymore...except of course, you."

"And yes, I see you spent a couple hundred thou on the bathrooms and kitchen and I'm sure you have enjoyed them but Buyers expect such finishes at this price point. Like I said, it's beautiful...it's just not 1.7 million dollar beautiful."

The point is I try not to promise the moon unless I promise a Price Reduction to go along with it. I'm very nice about it, though.

I once heard renowned newscaster, Sam Donaldson, state in an interview, "I don't go to the casinos because winning a hundred dollars means nothing to me but losing a hundred dollars really pisses me off." I concur. I also feel the same about newspaper advertising. IMO, it only brands the company name...it doesn't sell houses. Not here in Chicago, anyway. To spend money foolishly on a longshot bet is one thing, but to advocate such a strategy as a Marketing Plan is cretinous. (You can look it up if you like but it basically means stupid.)

Marketing in this day and age goes well beyond ink on paper advertising. If it is disposable then it will be disposed of. Print advertising is untrackable, expensive, and passive. I'd rather pay-per-click any (every) day of the week though the cost of doing business is equivalent. At least I know my hard earned money isn't wrapped around a dead fish in the garbage.

I am confident that Internet Channels, Digital Open Houses, and other technologies along these lines are the way of the future in Real Estate. And even as I restructure my own business model for the next five years I'll still make it a point to tip the paperboy every month when he knocks on our front door. (Besides being an enterprising young kid in the image of you know who, he's the best hacker I know.)

Ladybug In A Juice glass

I won't promise 'lightning in a bottle' to a potential client but I will pledge to use my resources (spend my own money) in the most efficient manner I see fit. Let's face it, the Listing Agent is in the hole the minute he walks out the door with the Exclusive and only collects when the property actually sells--correction: ...when the property actually sells under his watch. Phone calls from Vegas are never good under any circumstance, I've found.

I'll try not to promise the Moon no matter how much I allow myself to be manipulated by the situation (potential paycheck). And that is why we do it, you know. We Realtors are, ironically, the easiest people to manipuate because we count the money before it's printed. We may say we don't but most of us secretly do. After all, we have BMWs and college to pay for. (It also stokes our Ego when we nail a Sold placard across the For Sale sign. I usually wait until rush hour so everyone stalled in traffic can watch me perform the ritual. It usually takes a good half hour depending on whether or not I have to find and unbury St. Joseph.)

I may be big, and I may or may not be fat (depending on the season or what I'm wearing), but a Big, Fat, Liar I am not. Not all three. I won't promise 'lightning in a bottle' but I will do my best to catch a ladybug in a juiceglass. Oh yeah....and work for free until I get the place sold, just like every other self-respecting Realtor.