How do I really feel about that, I wonder? 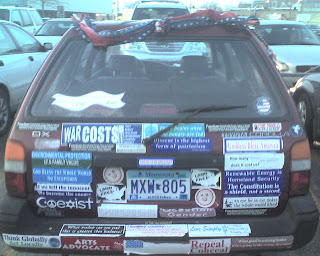 I see this car all the time around the northside of Chicago but have never actually laid eyes on the owner. I'm not sure why it intrigues me but it does. The stickered-up jalopy usually sits in one parking lot or another in the neighborhood near my office like some migrating obiter dictum on the state of the nation, world, and beyond. Once it was ahead of me in traffic and I did my best to catch up but I lost it at a four way stop during the evening rush. And just so you know, it's not without its own carbon footprint--a little leaky in the tailpipe for a self proclaimed harbinger of global causes, if you know what I'm saying.

Another time I actually parked next to it and waited 20 minutes for the driver to come out of a grocery store. Growing restless, I finally went inside to try and figure out who might best resemble the owner of such a traveling wilbury. When I came back to my own car without spotting a single credible suspect, it was gone. Like a gypsy in the crowd.

I suppose my interest lies more in the why surrounding this vehicular vagabond than the actual how of it all. Let's face it, the slowly rusting, smog emitting heap with all its pasted-on ideologies is just as valid a medium of expression as is this blog you're now reading (....hello out there...you are reading, aren't you? Please don't let this be one of those trees falling in that stupid forest everyone is always taking about but nobody really hears). It may even have more of an audience than me on any given day depending where it rests its leaking headers for the night. But it's all those words with all those hidden meanings that have me scratching my head this day. Like the one sticker on the bumper that reads: Repeal Conceal. What does that mean?

Or, Think Globally Act Locally. Coexist. War Costs $. I'm not sure what I'm supposed to think about all these things. I don't know where I stand. Do I side with Hannity or Hillary? Buddah or Jesus? In times of flux, everyone makes a good argument, it seems to me.

You see, as a realtor I don't even disagree with the FSBO model of home selling. I believe everyone has the right to sell their own property. Buy it, too, for that matter. As far as I'm concerned, the consumer can do his own legal work, as well. And to be truthful, I couldn't tell you what the Title Companies do for their fee. I was in the insurance business long enough to know that the risk is mathematically designed to expire before the claim comes in--if it ever does; hurricanes and tsumanis, notwithstanding. Hey, the premium reflects it. Don't let them tell you it doesn't.

This car makes me wonder, I guess, for what I really stand for in a world full of clans and echos, divisions and paradigms. Maybe its owner is just another version of me searching for a voice to identify with and hedging as many bets as possible to get some, any point across and be heard in this vast Polyverse of humanity. Maybe it's his only way to be noticed, pasting all those stickers on his ride. Or...maybe he just bought it that way.


Posted by GenoPetro.House at 8:33 AM No comments: 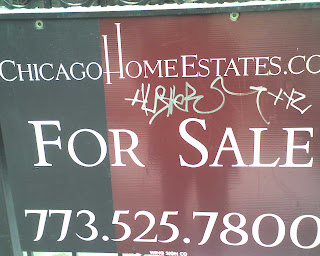 The truth of the matter is, I don't really care who I pay a fee to as long as I get something back for my money. Some trackable results. Maybe Alberto represents some emerging market I'm not aware of. Maybe he's been trying to page me and just never got through. After all, the pay phone at the end of my block has been out of order for three years. He probably just got tired of playing phone tag and decided to tag a building instead.

And if what I suspect is, in fact, true---I hope that I can at least get CE credits for watching "Snoop Dogg's Father Hood" on the E! Channel. I'm not sure if Alberto is down with that or not but hey, that's life on the real estate streets of Chicago. And if Alberto is indeed a drug dealer to boot, I only hope he's not a discount broker. Or...maybe he's just a moron with a magic marker.

Posted by GenoPetro.House at 3:33 PM No comments: