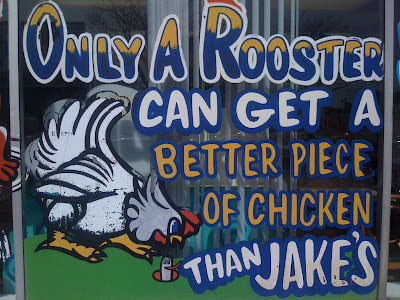 I work in a business where a lot of people go on record claiming to be the best at what they do. Of course, the opinion is purely subjective. We are our own biggest fans, us Roosters...I mean, Realtors.

The truth is, and I've mentioned this many times before, the hero is the Agent with the Listing at that serendipitous moment a bona fide Buyer walks through the door. In my Real Estate career in Chicago I've been simultaneously 'Hailed the Chief,' and stripped of my rank; promoted to the corner lot office, and given my walking papers. Currently, I'm the 5th (FIFTH!) Listing Agent on a 14 unit project with 6 units left to sale. Recently, I lost a Listing after 180 of the most brutal Market Time in recent housing history. It's all about timing, dear readers.

I believe there are many Realtors in Chicago who work everyday and always put the best interest of their clients first. All things equal, I believe I am one of those Realtors, and in fact, even at the head of the coop. But then again, nobody thinks more about me...than me.

And as far as my buddy on the photographed window sign above ^ is concerned, all I have to say is, "That's a bold statement, Jake. How do the chickens feel about that?"


Posted by GenoPetro.House at 6:40 AM No comments: 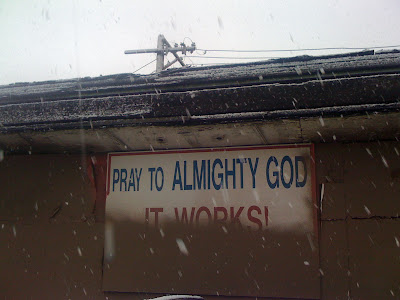 Personally, I would have thought for an incumbent, He'd have a slicker marketing plan and a little nicer digs. In fact, His headquarters building, shown here at Elston and Kimball on Chicago's Northwest side, looks a little shopworn to me but hey, who am I to judge? I admittedly haven't read Revelations so I'm not too sure of the 'Economic Stimulus Package He had in mind for this particular generation of Americans. I'm pretty certain though, Sacrifice must be stuck in there somewhere.

Perhaps it was attached as a congressional rider. Think about it; it makes a very good case for line item veto privilages for those in the highest office. But again, it's only me at the keyboard and as I've inferred early and often, Theology wasn't my strongest subject.

Anyway, since I've been known to give almost anything a shot, I pulled into the gravel parking lot on my way home, turned down NPR on the radio, and said a heathen's equivalent of a novena for world peace, the health of our own Nation in particular, and a couple of my Listings approaching the 180 day market time benchmark...for my Sellers' collective sakes, of course. (I'm already blessed in a lot of ways so no need going to that wishing well one time too many, if you know what I'm saying. I'm saving up those tokens for a free pass out of a real foxhole situation.)

Geno Petro
Posted by GenoPetro.House at 6:46 PM No comments:

I'm in the middle of a deal right now that is a little reminiscent of a plot line from Romancing the Stone---peril lurks around every corner and a single false step will insure either one of those big rocks rolling my way in a catacomb, or me getting yelled at by someone, for sure. At the very least, there's a feeling of impending doom and I'm being portrayed as ill intentioned Ralph, the Danny Devito character who's only in it for the money. "You know, I bet you can buy a great townhouse down here...for around five or six dollars," says poor Ralph in mock sincerity as his Sufi Arab captors drag him across the desert floor and into the darkness...

Actually the deal I'm referring to is already negotiated, out of Attorney Review and clear to Close--sort of. The 'deal' itself is cool...for the most part--only the final appraisal lingers in the wings. The actual condominium that is attached to the deal is what has a Curse on it. You see, it's New Construction. It has the notorious New Construction Curse wherein everything surrounding the transaction begins on a flat note back at Day One, continues off key, pitchy and not quite in tune through all the syncopated stages of completion, until the last and final hour when the heaviest lady at Chicago Title sings Goodnight Irene at the settlement table and everyone is free to pile into the elevator and exit the building in silence, all feeling that they somehow got gypped out of the real treasure along the way.

Even good news seems like bad news when the New Construction Curse has been cast:

Agent: "Good news, folks. The cabinets have arrived. "
Buyers: "Where were they?"

Agent: "I don't know. On the truck? Stuck at the Canadian border? Held up in Customs?" Doesn't matter. They're here now."

Buyers: "Seems like years. What color were they again? I think we might want to go with a differrent finish. How hard is that to change?"

Ralph stands at the very edge of the 900 foot craggy cliff contemplating the pros and cons of taking just one more baby step....

At this point he is only in it for the money, it would seem. And while most two-party deals move along as smooth as silk and without high adventure; like carrots and peas or Forrest and Jenny, such is not the case with those deals which are Cursed. It usually starts out with a simple email exchange:

Dear Ralph,
I found your website on Google. May be relocating to Chicago. Please enroll me in your Dream Locator. I want the world and I want it cheap.

Ralph,
Roger that. I'll be in town on Saturday. Rock on.


Then the househunting trip is scheduled, conducted and consumated. Fifteen condominiums are visited in a single weekend and a decision is made within 48 hours:

"I'll take the one by the lake that is almost ready. Tell them to upgrade the cabinets, beef up the lighting allowance and be ready to close in 60 days. I want the preferred parking space, steam showers in all bathrooms and California Closets throughout the unit. Heat the floors, paint it all blue, and pay half my Closing Costs at settlement. Tell them if they do all that, we got a deal..."

I do as I'm instructed and get them to agree. What else can they do? It's a world buyer's market and there's no shortage of world right now, not in Chicago anyway. They always agree to what they can't deliver. That's what 'they' do best. And 'they' know who I'm talking about, too.

It's my belief that such a 'Curse' often begins during the negotiation with unreasonable expectations. Not always, but often. Anyway, here's how the afore-mentioned scenario has played out for me and my client up until this point in time:

January 25-26: Viewed 15 different properties; some resale, some new, some proposed.

January 27: Submitted an offer on a Model unit in a New Construction project in near move-in condition.

January 28: Negotiated details with the Listing Agent and Builder and reached a verbal agreement with only minor changes.

January 29: Another higher offer comes in and is accepted and signed by the Builder. We get bumped out of the Model deal but are offered a 'yet to be built out' unit on the same terms, one floor above.

January 30: We accept the deal on the the condition of a 60 day completion and a close of escrow on April 1st. They agree.

January 31-March 6: My iPhone barely rings. Nothing significant transpires except: Cabinets are delayed. Original lighting is no longer in stock. The wrong color granite is ordered. Paint color is three shades off. Closets are on back order.

March 7: Chicago City Council votes overwhelmingly to increase the Property Tax Stamp on home sales by 40% and passes it on the the Buyer effective April 1st.

March 8: We ask to move up the Closing date one day to March 31st but the Builder is reluctant to do so.

March 9-16: New selections are chosen and things move along at a snail's pace.

March 17: City Council reverses its decision and votes overwhelmingly to pass the 40% Tax Stamp hike onto the Seller instead, effective April 1st.

March 21: Here I sit, frustrated and contemplating walking the earth like Caine in Kung Fu except no Shaolin Monk, am I. In fact, staying in any place with less than a 3 star rating is a little distasteful to me not to mention my martial arts are a little rusty to be hitting the road barefoot, at age 51. The iPhone is ringing and pinging even as we speak. I pause and listen to the voice mails and then read the multiple texts email messages. I have no more answers for this day. I fly out of town at 5:30AM tomorrow morning for a weekend with family and loved ones. What can I say? It's not my only deal. There are also a half dozen other Listings with my name attached that need an equal amount of attention. And again as many Buyers in the car as well. Everybody has questions. I scramble for the correct answers. I let the Sufis have their way with me...

The Curse will be there when I return; of this I'm certain. I also imagine most of my Listings aren't going anywhere between now and Monday either. And just as sure as Michael Douglas, aka Jack T. Colton, gets Kathleen Turner in the final scene and poor, pithy Ralph gets his just desserts in the desert, we will all live to star in another sequel and grapple with another 'Curse' or two before it's lights out for everybody.....Jewel of the Nile, or otherwise. And not to mix movie metaphors but 'That's all I have to say about that..."


Posted by GenoPetro.House at 8:47 AM No comments: 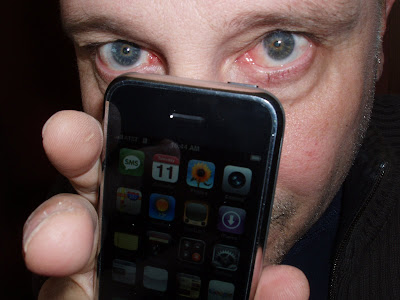 The Promo Sapien is a direct descendant of the more popular and easily recognizable species known as the Homo Sapien--latin meaning: "wise or knowing man {or woman}." The PS, while similar in many ways to the HS, is generally a more smiley yet slightly condescending sort of creature who, in recent years, migrated en masse to the real estate business and enjoyed fleeting success until Global Warming and Web 2.0 set in and all the remaining unlicensed regular Sapiens learned how to find properties on their own on Zillow. They usually can be spotted these days in Starbucks with Blackberry in hand and Bluetooth in ear somewhere between the moms and the toddlers. At least, that's where you can usually find me.

This social glacier calving, as it were, spawned yet another subspecies, the Self-Promo Sapien--Chicago meaning: "any Realtor who constantly professes his or her superiority over any other qualified but less self-promoting PS as well as all HSes in general--and can be found on most any page of Chicago Agent Magazine (or any other industry ledger that will publish a 'Feature Article' if enough accompanying ad space is purchased), sic." And again, that's where you might one day find me as well, if someone can ever convince me it's worth the advertising ruble.

But for now I think not. The truth is, if no one else is offering up the accolades, I don't feel the need to make that superlative declaration myself. Now I will publish all compliments and 'attaboys' in my sidebar on the right; verbatim, referenced of course, and unsolicited all-- but I am not inclined to utter the words of praise myself, to be set apart from and above, all other PSes and SPSes with a Blackberry and an earpiece. Besides, the best Realtors in this town have already switched over to iPhone...


Geno Petro
Posted by GenoPetro.House at 9:04 AM No comments: 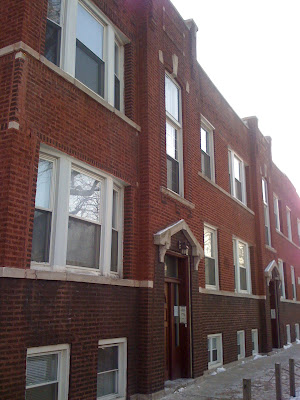 Offered by Geno Petro
Posted by GenoPetro.House at 6:39 PM No comments: