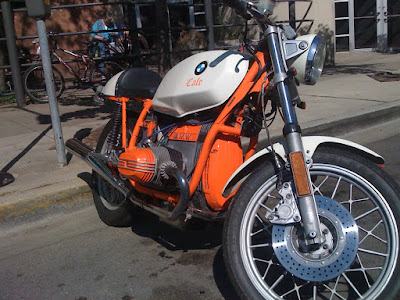 I was cruising down Lincoln Avenue last week when I caught a glimpse of the rare bird out of the corner of my eye. She was perched at a meter in front of the Starbucks at Greenview but by the time I pulled over to the curb for a closer look, she had flown away in the opposite direction towards Southport Avenue in a blur of orange creme beauty. I couldn't identify the exact specimen at first but I made a note to myself on the iPhone...'Cafe Racer/Orange/very rare/Google it.'

Two days ago I saw her again, banking the Diversey/Racine/Lincoln 6 way at a 45 degree angle and sling shotting toward the Chicago lake front and all things high rise and condominium. I did a loose back end U-turn, gunned it, but lost her just before the Sheffield Brown Line construction quagmire, my Mini Cooper jammed between two CTA buses and a Flash Cab, everyone's horn blaring at once in the same impatient disharmony. This time I noticed the badge on the gas tank as she weaved between vehicles, eastward and away---BMW Cafe. She soared into the exhaust horizon...

Now if you've ever met my father you would know for sure that you've been in the presence of a true Birder (that's a bird watcher in layman's terms). The fascination has been there for as long as I can recall. There was the time he spotted a 'flicker' (Woodpecker? Not quite) on Roosevelt Boulevard in Philadelphia and stopped his Cadillac dead in the middle lane of traffic for a better, craned neck view. There were the countless trips to Cape May, New Jersey and the Maryland wetlands, in his younger days, to catch a glimpse of soaring eagles or sandy beach egrets. His den at home is packed with Omithological reference books, high end binoculars, artwork, photos, and bird sounding clocks. Lot's of clocks--every hour, on the hour; CHIRP. Chirp, chirp, WHISTLE, Whistle, whistle, BEEP, Beep, beep or some variation thereof. Anyway, that's where I get it from.

I've always looked at motorized vehicles, cars and motorcycles alike, as engineering wonders of beauty (save the occasional Chevy Vega or Ford Maverick. The AMC Pacer was pretty lame too, along with countless station wagons and most things with four or more doors). Some however, are almost the same as Art. The rare few are Art. I've collected them for years in my mind.

When I was seven or eight years old I would sit on the grassy area alongside the Mill Creek Parkway in Levittown and identify the cars as they zoomed by; 1950s and 60s Impalas, Bel Airs, Imperials, the rare Corvette Stingray, a whole variety of Studebakers and Ramblers. Later on, and a little further south down the Eastern Seaboard, motorcycles would be included in the ritual; Triumphs, Nortons, BSAs and of course, Harleys. I never did acquire a taste for anything Japanese (two or four wheelers) although the new Lexus L650H V12 Hybrid Super Sedan is a bad maama jaama, from what they say.

My first and only motorcycle was a 1969 BSA 441 Victor; yellow and chrome with a ripped leather seat and scratchy horsehair sticking out. It smelled like a saddle; a saddle and motor oil. I rode it until it needed a total rebuild and eventually sold it in a basket for $441. It, like most of the guitars that have also passed through my hands over the years, would be worth many, many times the original value had I kept it. Doesn't matter anyway, my wife won't let me have a motorcycle and my dog goes bonkers whenever he hears one rumble down the street as every other husband on my block in Forest Glen has a big, fat Harley (okay, maybe not every husband, but a few...at least one I'm positive of, although he may not actually be married anymore). Anyway... I am allowed to look...

I saw the orange and creme BMW Cafe parked in front of the Starbucks near my office on Friday. I recognized the owner as he sat on the patio and worked his crossword puzzle. I felt like a kid asking for an autograph as I interrupted his morning ritual.

"Is that your bike?" I asked motioning toward the sidewalk with my head.

"Can I take a picture?" I followed.

He looked up at me for a second, sizing me up no doubt; 'Older dude. Bike enthusiast. Probably has a wife who won't let him have a motorcycle.'

I almost got clipped by a beer truck as I stood in the street trying to get a cool angle with my iPhone camera. Like I mentioned earlier, I am very closely related to a man who will slam on the brakes in the middle of Philadelphia to see a yellow breasted sap sucker. We are fearless, us Petros, if nothing else. Fearless with an eye for beauty.


Posted by GenoPetro.House at 6:20 PM